William Warren Harless was a natural athlete and handsome with it. Born on 9 March 1867 in Chigago, Illinois to Thomas Henry and Barbara Ann King Harless, he was the youngest of 8 children (2 older half-siblings had died as children almost 20 years before William was born). William Warren was only 3 years old when his father died, but his mother was well provided for and was able to raise her children by herself until she chose to remarry when William was 11 years old.

William Warren Harless began his higher education at Notre Dame but transferred to the University of Michigan because Notre Dame did not play football.

For the 1886 season William was a substitute player, but was a rusher for the 1887 season and was invited, with his teammate, George Dehaven, back to Notre Dame for a training session to teach the Fighting Irish this new game. Perhaps William was a better player than a teacher, but when Notre Dame played their first ever game, against Michigan, they were defeated 8-0 and it would be 32 years before the Fighting Irish would achieve victory over the Wolverines.

William played football as a center, a rusher and a guard, but this was not the only sport he participated in. In 1887, he came first in putting shot (29′ 3″), and the hammer throw (56′ 10 7/8″), but was defeated by W. C. Malley in heavy weight wrestling. It was noted that both the hammer and the shot were overweight and that otherwise the distances might have been greater. The prizes were of interest too, a set of George Elliot’s works for the hammer throw and Paradise Lost for the hammer throw. 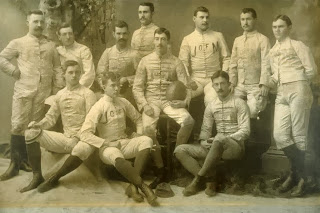 After university William Warren Harless became a civil engineer and married Mary Jane Lennon in 1896. William and Mary had no children, and when the Spanish-American war broke out, William joined the US Army as a quartermaster in the 7th Illinois Infantry.

Following his stint in the army, William became the manager of an insurance company, but his love of sports had obviously not left him, as he served as the Secretary of the West Golf Association for a number of terms.

Bernard V. Harless, 91, of Pacific Junction, died Nov. 24, 2012, at the Hospice With Heart facility in Glenwood. Funeral services are Wednesday, Nov. 28, 2012, at 2 p.m. at Peterson Mortuary in Glenwood. Rev. Gene Hilton will officiate. Interment will be held in the Martin Chapel Cemetery, Pacific Junction. A memorial fund has been established.

Bernard married Myrna M. Rupe Dec. 11, 1943, in Glenwood. To this union two children were born, Karen and Gregg. Bernard was employed as a railroad clerk for Burlington Northern Railroad until his retirement. He was a member of the Full Faith Church and Masonic Lodge. Bernard was a man of many talents. His woodworking, painting and making jewelry were just a few of his crafts. He could sew beautiful clothing for his family. Gardening and outdoor animals also gave him great pleasure. He was a devoted husband, father and grandfather and will be deeply missed.

Preceding Bernard in death were his parents, sister, Margaret Mott and brother, Robert Harless. He is survived by his wife, Myrna Harless of Pacific Junction; children, Karen and Don Meredith of Omaha, Neb.; Gregg and Jackie Harless and grandson, Bryan Harless all of Glenwood: two half-sisters, Shirley Godfrey of Arvada, Colo.; Myra Rucker of Denver; nieces, nephews, extended relatives and many friends.